As my amazing email VIP reader list is aware, the sequel to Erin Hayes’ The Royal Trade: A Billionaire Prince Romance just got released. 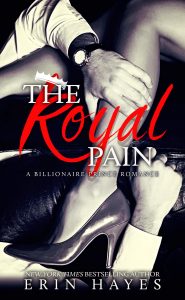 As the crown prince of Dubreva, Phillip lived a life without regrets. Until now.

Disgraced and humiliated by his very public break-up with his ex- fiancée, Phillip just wants to move on with his life as quietly as a billionaire prince can.

He can’t avoid his duties to his people—but he never expected to be thrown into the path of a beautiful CEO who’s even more famous than he is. And richer. Not to mention, the media empire she built from the ground up is watching his every move.

Lucky for him, she’s not at all interested in helping him find redemption. Then again, Phillip may be falling for her. If only she would stop being such a royal pain.

Nab your copy by clicking here.