As a writer, I spend far too much time at my desk. I write, I surf the ‘net, I (ahem) eat there, too. I’ve often thought of ponying up the dough to snag one of those “active workstations” that let you walk while typing. You know, one of these thingies: 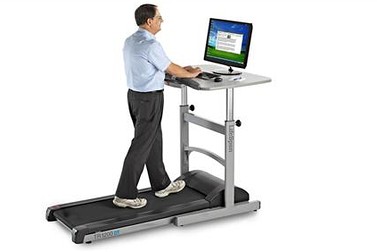 Well, like my big exercise ball that sits dusty in the corner, it appears as though these “desks” aren’t all they’re cracked up to be.

The idea of “active workstations” sounds great. Why not burn a few calories at a treadmill desk while you work, or strengthen your abs on a giant rubber ball while returning emails?

As these products have grown in use, so has feedback on their downsides.

We’re talking downsides like “rampant misspellings,” difficulty typing, and increased appetite. Considering these desks run anywhere from $2,700 – $4,300, those are some pretty big downsides. Then we have this:

“It was a terrific idea, but it just really didn’t work because they really were not very safe,” says Wolff. Clients who tried them have reported “many” employee falls and were concerned about workers’ compensation risks, she says.

Of course, we also have the issue of human nature:

As with other exercise regimens, people tend to lose interest in workstation fitness products over time. A recent study from the University of Iowa found that when stationary bikes were offered as an alternative to desk chairs, only 19% of employees still used them after four weeks. Lucas Carr, author of the study, says reasons include lack of motivational support and anecdotal evidence that participants’ knees were hitting the underside of their desk.