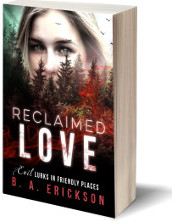 Anne Olssen is blindsided when her husband is killed in a tragic car crash. Penniless and nearly homeless, she agrees to uproot her little family and move to Connecticut with her sister. With the overwhelming desire to remain strong, Anne finds herself in a precarious tug of war between maintaining her emotional strength and an unmistakable force pulling her into delusion. To make matters worse, her brother-in-law isn’t exactly thrilled with the situation and kicks her to the curb.

Steven Vandrose is a musician at the top of his game. To the casual observer, his life appears perfect but too many parties, gallons of alcohol, and a myriad of bad choices have left his musical empire on the brink of collapse. And he apparently doesn’t care because his own wife’s death has unleashed demons of his own.

When Steven and Anne finally meet, they collide in an avalanche of curiosity, passion, and unadulterated horror. Can their newfound affection survive the demons they must wrestle to reclaim the ability to love?