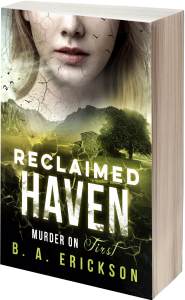 Ashley Stone’s life turned upside down when she accepted a job at a small town newspaper. Harboring a deadly secret, she’s unexpectedly plunged into a vortex of international intrigue, murder, and foul happenings. To make matters worse, Ashley’s wrestling her own demons and as her life unravels, who can she turn to when all hell breaks loose?

Intrepid photographer, Ned Stevens, escaped to small town Minnesota hoping to get away from big city drama. But he leaped from the frying pan directly into the fire. Little did he realize Crossroads was the hub of a global terrorist network… and he unwittingly holds the key to unleashing unparalleled terror.

When a dark stranger rolls into town, quiet small town life turns on its ear. Friends become enemies. Safe havens turn brutal when a local is murdered in a most unimaginable way. With friends, lovers, and coworkers at risk, will Ashley and Ned be able to reclaim their haven?

Pick it up at Amazon. 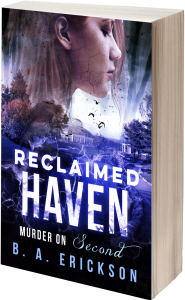 Ashley Stone’s new job leaped from dream to nightmare faster than you can say “small town murder.” Swept into an unimaginable vortex of international intrigue and global terrorism, Ashley has to somehow untangle the motives of a clearly insane mastermind. This is, of course, assuming she can subdue her own demon… a secret so breathtaking she can barely acknowledge it.

Dashing Ned Stevens fell hard for Ashley. This former one hit wonder, boy band member finally met the woman of his dreams… but her inner demons may tear them apart. To make matters worse, has his blind adoration made him unable to protect her from the sinister forces descending upon the once tranquil Crossroads? 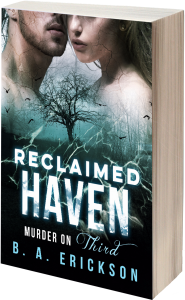 Ashley Stone can’t take much more. As her personal demons rise to a new and terrifying apex, outside forces swirl in a sinister plot. In her quest to untangle the terrifying brood behind the horrifying string of Crossroads murders, she’s neglected her health, her well being, even her safety. As a black shadow infiltrates Crossroads, she must either retreat into insanity or trust a rag tag troupe of intrepid terrorists to help untangle the plot.

Ned Stevens is a man on the cusp of losing everything he holds dear. The Crossroads Herald is on the brink of collapse. Friends drop like flies. He feels true love slipping through his fingertips. When he realizes all the wealth in the universe cannot save the love of his life, he must venture into lawlessness.

Friends become mortal enemies. The quiet town of Crossroads explodes into a cacophony of debris. Can Ashley and Ned’s love survive the unimaginable? As danger lurks, will they reclaim any semblance of a safe haven?