Beware. A potentially NSFW pic ahead. Woah, that makes two NSFW posts in a row. How unusual. (This pic isn’t all that bad, but I’m never sure what some people categorize as NSFW). You’ve been warned. 🙂

Here’s what happened: I’m minding my own business, surfing the ‘net, when I ran across this pic: 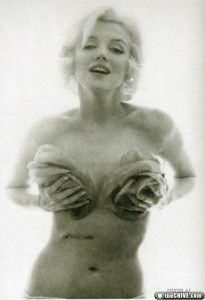 My jaw dropped. Do you see it? It’s hard to miss.

See the scar on her belly? Yup. It’s very similar to mine.

Turns out, she had her gall bladder removed. I had a good chunk of colon removed. Hence, we’re scar-sisters.

Granted, my scar is longer, plus I have a couple laparoscopic slits, but hey… I’ll take any similarity with Ms Monroe.

Thing is, every other colon cancer person I’ve seen has a nice vertical incision with a awesome swerve around the belly button. I didn’t get that.

So, finding this pic was oddly gratifying.

Someday, I’ll be super-brave and post my own scar pic… maybe. Perhaps someone else with a choppy horizontal incision will find it comforting. 🙂

(I found the photo here.)