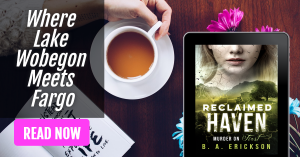 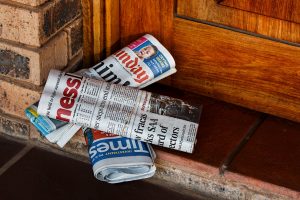 The folks of Crossroads, Minnesota, population 513, hadn’t seen anything like it before. They’d survived tornadoes, budget cuts, power outages, sewer breaks, acts of God, and what was considered (by some) satanic attacks. But the moment Justin T. staggered towards the post office forevermore replaced them all, including the 1969 town centennial, as the most exciting community event. Ever. His shrieks would live in infamy, verbal descriptions of his demeanor, his clothing, his facial expressions would be mimicked (in various, ever escalating forms) for decades.

Justin T. delivered the Crossfield Gazette to residents of Crossroads every morning (minus Sundays and certain holidays). It irked Bart to no end that a fellow Crossroads citizen would patronize that odious, competing publication. Just because they were a daily, could pay their staff better wages, had a better (unearned, in his opinion) reputation, and bulldozed through every story, scooping him on a regular basis didn’t mean they were better.

Either way, he liked Justin’s family. He graduated with his father back in ’79 and befriended his mother years ago. Last year was rough on Justin’s family. His mother was diagnosed with Lyme disease and suffered intense fatigue since then. His father lost his job at the county jail due to budget cuts. His sister had gone rogue, hooked up with Ike Moe, and suspected she was now pregnant, although her parents were yet to receive these little bits of information. As of yesterday, it appeared as though hard-working Justin T. would be the only person in that family who would “turn out.” Now this.

Given their precarious financial situation, Bart couldn’t hold it against them that they’d allow their son to don the Crossfield Gazette knapsack and deliver his direct competition. After all, poor Justin was basically on his own, using his earnings to purchase crazy things like clothes, food, a few used console games, and general school supplies. So far, Justin had done a fine job, raising himself. But it was painfully clear he’d need some serious help after seeing whatever it was he saw.

What happened to Justin T. on that fateful autumn day forever cemented Bart’s decision to keep his complaints about Justin delivering the Crossfield Gazette to himself. 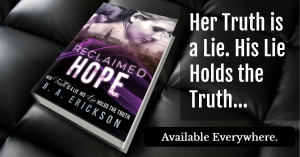 It began as any other day. Cold, crispy snow, frigid wind made his skin erupt in a million goose pimples. Silence stung his ears, even birds weren’t awake at this hour. He enjoyed this moment… the brief window just before the sun rose and the town rested in serene slumber. Even wild animals crept quiet, always keeping a safe distance.

He tramped through back yards, up alleys, always carefully placing the newspaper between the screen door and main. That’s where people liked it. That’s where the biggest year end tips lied.
In the big city, paper carriers rode bicycles and tossed their wares onto lawns, driveways, roofs. Not here. Small town folk got special treatment. Right inside the door… that’s where the paper belonged.

He recalled Saturday morning’s route, nothing unusual, just serene silence punctuated by frigid wind nips. He really liked non-eventful days. The mornings he didn’t encounter dogs, cats, raccoons, or cranky residents made for a perfect route. He had Sundays off, no paper. He had Monday off. Holiday. Although it would certainly bite into his weekly income, Justin appreciated a little leisure. On those days he could sleep in… all the way to 6 AM.

Today he ran behind schedule. It was tough not to oversleep after a couple days broke his rhythm. Sure, he’d miss a couple hours of school today, but he needed the income. He decided to explain it to his parents later… if they ever found out. They were busy with their own trouble and rarely kept track of him.

He proceeded through his route, steps accelerating as he neared the end. He checked his watch, gratified to note he wouldn’t miss much school. On the last block he threw it in high gear and raced to finish. He zipped through the yards, whipping open screen doors, throwing in the paper, and slamming them shut… all with the efficiency of a pro.

He was just performing his maneuver at the Alexander Kaufman residence when he unexpectedly slipped on the cement stoop, landing with a dull thud on his right side. Dazed, he paused a moment before he noticed the stench, the utterly horrific, nasal piercing, stomach churning, horrible odor of insanity, rot, violence. Terror flooded his being as he raised his hand and it arrived in his field of vision dripping with coagulated goo. In spite of every macho lesson his father ever taught, he involuntarily shrieked in a most undignified manner. When he realized he was surrounded with the goo, another garbled bellow rose in his throat.

Before he could ascertain what was going on, he found himself wallowing in the mess, attempting to rise, but slipping back to his knees, onto his shoulder. He fought the mess, wrestling it like an invisible invader. He rolled about, unable to rise, the frigid goo permeating his clothing, coloring his skin.

He was covered in the stinky mess. It hung in long strings making him appear like a marionette whose cut lines dangled from his fingers. He cried for help, but no one arrived.
Despite pain shooting from his various scrapes, he managed to maneuver himself to his feet and stagger forward appearing like an amateur propelling himself forward on an ice rink. He vaguely pondered the escalating shrieks filling the void of silence, then realized the sound originated from his own throat. Panic welled in his belly as putrid slime clung to his clothing, smeared to his body, splattered his face. The the odor choked his nostrils so bad, he could actually taste the scent.

He staggered away from the house, limping, gasping, groping… hoping to somehow escape whatever it was that choked him, hoping to erase the images now seemingly tattooed in his memory.

He managed to stagger to the post office as adults surrounded him.

“What happened,” gasped one.

Another steadied his shoulders, but quickly retracted when their hands smeared into the gelatinous slime.

Justin collapsed in a heap. “Help me,” he murmured.

This online novelization is brought to you by: