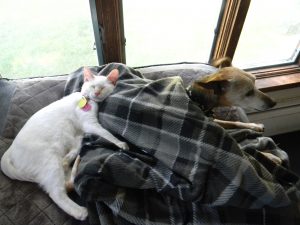 Jake turned 17 this fall. We adopted him when he turned six and he’s astounded us from day one.

He has every reason to be the angriest animal alive. But he isn’t.

He lived in the basement of his old home, chewed at his cage until he wore down his teeth. They’re totally flat. They never house trained him. As a Miniature Pinscher, he came to us little to no hair. He’s unbearably hot in the summer, freezing cold in the winter.

Then they surrendered him. Then we found him.

He’s outlived his best friends, including our beautiful Rudie the Doxie Cross.

He endured the day when Luna the Calico cat claimed the house. Most recently, he met Lina, our newest rescue, a Flame Point Siamese. She adores him.

He hates photographs, I must sneak them when he’s asleep. He still catches me and runs off.

His attitude has taught me tons.

He’s kind. He snuggles Lina. (He’d definitely snuggle Luna if she’d let him.) He claimed my nieces as his own.

He comforted me when Rudie passed away.

He does all this even though the lenses in his eyes are clouded over. He can barely hear. His once thin hair is entirely gone, leaving dark paper skin.

The vet tells his his liver is failing. His thyroid went kaput years ago. His tummy complains when he steals cat food. (So do the cats.)

Sometimes he’d rather sleep in. And we let him.

But he’s alive. He loves life. His bright eyes may not see like they used to, but he loves us with all his heart. For that I’m sure.